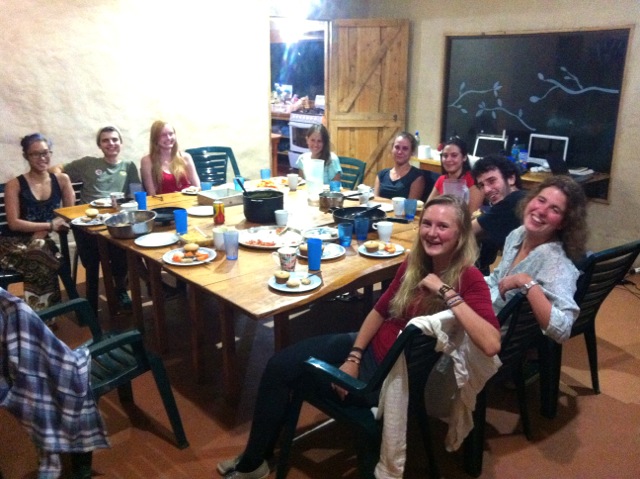 Always something to do:

There is never a dull moment when managing a reserve.  This month the waterline up the mountain separated causing a large amount of moisture to saturate the area resulting in a small landslide that came down and covered some of the tree nursery.  It also caused the waterline down below to break which meant no water to the hydro-electric plant.  Manager Frank managed to keep his cool and after much work and repair things are back in operation!

As I sat in a Northern California forest this month enjoying the giant redwoods it was startling to learn that corporations denuded the area grove by grove so those of us living in the rest of the United States could have cheap redwood siding and decks for our homes. I realized that I had participated in the destruction of these magnificent trees by buying the cheap lumber and not stopping to think about where it came from. But at the same time it was reassuring to learn that the remaining groves were saved from the ax by concerned individuals with a passion for the trees. Even today there is an ongoing campaign to find large donors who will purchase the remaining groves that are outside protected areas.

Back in Costa Rica Ian & Genevieve Giddy were doing the same thing. Their vision has grown over the years from letting a part of the cloud forest regenerate on its own to enhancing the regeneration with an active reforestation program which has evolved into an educational opportunity for thousands of individuals each year.

We don’t all have the means to invest in a grove of redwood or to develop a research center in Costa Rica, but we all have the ability to talk to our politicians – our policy makers, and to share with them the importance of the environment. Whether it is to encourage incentives for sustainable energy, stopping the mining of coal, expanding funding for environmental education in our schools, or to stop the subsidies to large oil corporations, the list is endless.  The state of the climate tells us that we must all do our part if we are to leave the next generation with a whole planet.  Therefore, call your congressman, your parliament representative or whoever represents you at the policy making table and share with them what is important to you. Person to person, face to face, (not electronically) try inviting your representative to your favorite natural area. But do it now the clock is ticking.

The suspension bridge over the Uran River

Where are they now?

Adam Wicks-Arshack  first came to Cloudbridge on a visit with friends.  He eventually came every year for the 3 month position as resident biologist.  He has had a long relationship with the reserve and enjoyed his time teaching others about the ecology of the area in Costa Rica.

Today Adam and some friends have acquired property to have their own little piece of paradise in the state of Washington.  Their company ‘Voyages of Rediscovery’ does educational voyages on the Columbia river.  https://www.facebook.com/VoyagesofRediscovery   In 2014 they paddled the Columbia River from sea to its source in the Canadian Rockies.  This project recreated the journey of the salmon before the dams on this river blocked the route to their spawning grounds. The summer expedition in dugout canoes raised awareness of the plight of the ecology of these fish.  Adam and his friends also produced a documentary through this experience to raise awareness. It will be presented in 2015 in various cities. https://vimeo.com/voyagesofrediscovery

Adam is very busy these days as he is back in university in Moscow Idaho, studying law and working on his PHD.

Good luck and we hope he gets a chance to come back down to Costa Rica in the future.